The Angry Atheist who made AA Great

Jim B., often wrongly overlooked, fought Bill W. to a draw over the original wording of the 12 Steps. “God” got qualified and tolerance got added. Without this nonbeliever, AA would never have thrived. 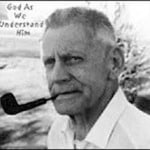 Bill Wilson and Bob Smith are hardly household names, but the identities of the men who first joined them in what came to be Alcoholics Anonymous have been all but forgotten. Who remembers Jim Burwell, the auto polish salesman from Washington, DC, who refused to believe in God?

Burwell, drinking, had lost some 40 jobs since getting out of the army after serving in World War I. A short, redheaded, pipe-smoking man with strong opinions, he had grown desperate and suicidal until one day in 1938, at age 40, he got a call from Jackie Wilson, a friend of Burwell’s boyhood buddy, Fitz Mayo. Jackie—who had one month of sobriety, but would soon start drinking again—persuaded Burwell to move to New Jersey to get sober with the 10 or so men who had together found a new way to stop drinking.

By 1938, these East Coast founding fathers, Wilson, Hank Parkhurst, Paul Rudell and Fitz Mayo, along with one secretary, Ruth Hock, were officially selling automobile polish and parts through an outfit called Honor Dealers with offices in Newark. Bill and Lois Wilson had lost their house on Clinton Street in Brooklyn. They were living, along with a few of the others, at Parkhurst’s house in nearby Montclair. Hardly a promising group, they were all staying sober by meeting together and following the brand-new 12 Steps written by Bill Wilson. Their vocation was Honor Dealers: “We were all set to put DuPont out of business,” Burwell wrote later in “The Vicious Cycle,” which now appears in the “Personal Stories” section of the book Alcoholics Anonymous. But their avocation—staying sober and helping others get sober—would have immeasurable benefits for the world, even if no one’s car got shined and no one’s muffler got fixed.

When he got to New Jersey, Burwell was immediately horrified to find most members of the group droning on about faith and religion and God. They even prayed! Among these Christian salesmen trying for redemption, Burwell and Parkhurst refused to go along with the idea that God was responsible for their sobriety. “All they talked of that first weekend was God,” Burwell recalled with disgust in his Big Book story. The son of a doctor in Baltimore, Burwell had turned against organized religion at a Protestant boarding school where he was sent at age 13. Even as a teenager he despised what he saw as the mindlessness of faith in God. “I swore I would never join or go to any church,” he wrote.

The other men spent time and energy trying to convert Burwell, but it was “nothing doing.” During Burwell’s first qualification he burst out, “I can’t stand this God stuff! It’s a lot of malarkey for weak folks. The group doesn’t need it and I won’t have it. To hell with it,” according to Bill Wilson in “Tradition Three” of The Twelve Steps and Twelve Traditions. At first, Burwell’s new friends were adamant. The idea of questioning God was likely as threatening to them as the idea of questioning their fragile sobriety. Burwell had stopped drinking but he defiantly refused the idea of a Christian redemption. When after a few months of sobriety he started to drink again while on a sales trip, they refused to help him. Tradition Three tells the story of men so terrified of losing what they had gained, and so menaced by Burwell’s refusal to believe in God, that they actually took small-minded satisfaction in their friend’s failure.

“I can’t stand this God stuff! It’s a lot of malarkey for weak folks. The group doesn’t need it and I won’t have it,” Burwell said.

But Burwell was as persistent as he was insistent. He stopped drinking and refused to go away, and he was finally allowed to rejoin AA even with his “unacceptable” attitude. His atheism was especially unwelcome when it came to the one piece of literature that Bill Wilson had already written (in pencil on a scratch pad in May 1938), “The 12 Steps,” his statement of the new program’s principles. “I would not change a word of the original draft, in which…I had consistently used the word ‘God“,’ he wrote in Alcoholics Anonymous Comes of Age.

Burwell and Parkhurst, however, refused to sign on to the document. Since they constituted 20% of the group, Bill was forced to hear them out.

Finally a compromise was reached, and four key changes in the document were agreed to. In Step Two, “a Power greater than ourselves” replaced “God.” In Steps Three and Eleven, the single word “God” was qualified by the addition of “as we understood Him.” “On our knees” was cut from Step Seven. And the sentence “Here are the steps we took which are suggested as a Program of Recovery” was added to introduce all the Steps; they were being offered as “suggestions” rather than imposed as “rules.”

It was Jimmy Burwell’s uncompromising stance against religion that initially forced Alcoholics Anonymous into the tolerant, open and welcoming group that has helped more than two million believers, agnostics and atheists. It was Burwell and Parkhurst who bridled at Bill’s original “God”-centered Step Three and pestered the group into the all-inclusive revision, “God as we understood Him.” And it was Burwell whose “bad behavior” was the foundation of the Third Tradition in which the only requirement listed for AA membership is a desire to stop drinking.

As the early AA grew, its members also grew more confident. Soon there were 40 men staying sober and then 60. Sitting at a desk in Honor Dealers, Bill Wilson began dictating The Big Book (then titled 100 Men, the Way Out; or Dry Frontiers) to Ruth Hock. Each chapter would go the rounds in New York and Akron with dozens of suggestions added to the manuscript. Bill said that he felt more like an umpire than a writer. Out of this dynamic collaboration came the first 164 pages of what came to be titled Alcoholics Anonymous and gave the fledgling group its name.

Although Burwell mellowed with age and sobriety, he remained a maverick. Making a 12-step call in 1939 to a woman named Rosa, he helped her get sober and then married her. The next year, Jimmy and Rosa moved to Philadelphia, where he started a new AA group. Bill Wilson sent him a letter alerting him to the arrival of Jack Alexander of the Saturday Evening Post and asking him to set up appointments for her in Philadelphia. When Alexander’s favorable piece on AA appeared in the national magazine, the young organization was established overnight as a serious and effective option for alcoholic treatment.

When Burwell had eight years of sobriety, he and his wife moved to San Diego. There Burwell became AA’s unofficial archivist, putting together a huge scrapbook on thick brown butcher paper between welded metal covers (available for viewing at the General Service Office in Manhattan).
“Personally I don’t care a rap who did what,” Bill Wilson wrote to Burwell later. “But if this thing keeps growing and making a stir, I suppose some historian will want to know the real facts by and by. If we don’t assemble them now, the record never will be anywhere near straight. And lots of interesting detail and incidents will be forever lost. So your effort in this direction is tremendously appreciated, Jim.”

Burwell’s scrapbook is a miniature history of AA with every newspaper clip, photograph and letter that came across his desk.

Like Jackie Wilson, who placed that first call to Burwell, Hank Parkhurst didn’t stay in the group. He began to drink again and lost touch with the men of Honor Dealers, who had moved to dingy offices in Manhattan, where Bill and Lois lived upstairs from the AA clubhouse. Burwell stayed sober and was an active member of AA until his death in 1974 at age 76. Although he remains little known, his contribution to AA was undoubtedly necessary to its survival as well as his own.

In Alcoholics Anonymous Comes of Age, Bill Wilson paid tribute to Burwell, Parkhurst and the changes they forced in AA’s principles: “This was the great contribution of our atheists and agnostics. They had widened our gateway so that all who suffer might pass through, regardless of their belief or lack of belief.”

Susan Cheever, a columnist for The Fix, is the author of many books, including the memoirs Home Before Dark and Note Found in a Bottle, and the biography My Name Is Bill: Bill Wilson—His Life and the Creation of Alcoholics Anonymous.