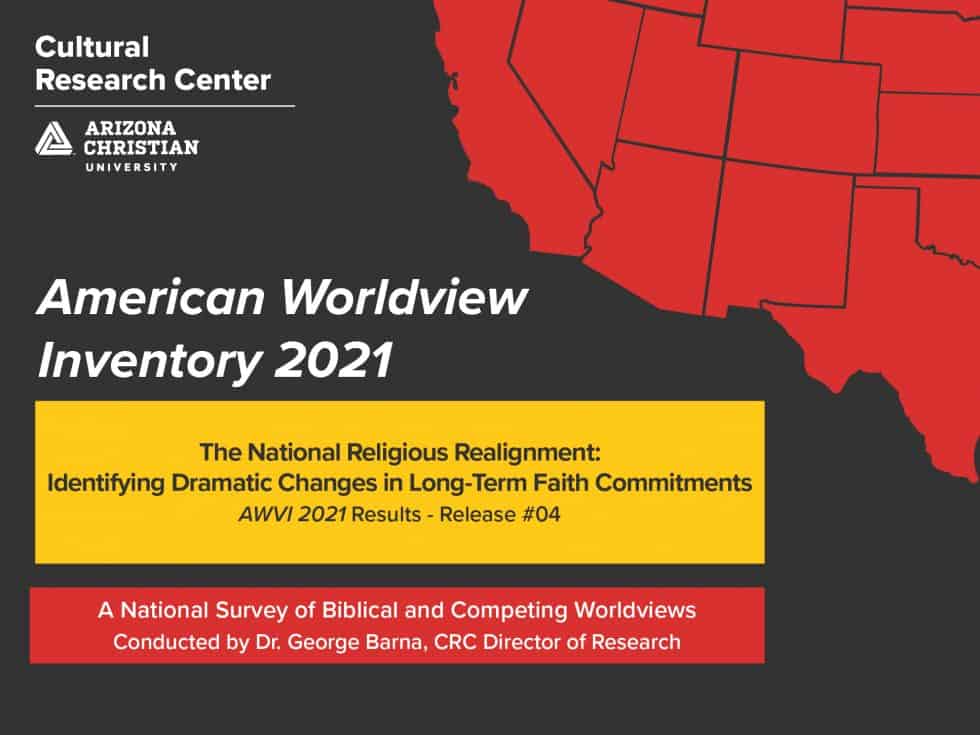 From the Cultural Research Center at Arizona Christian University

The dramatic erosion of America’s shared Christian belief over the past 30 years is causing unexpected changes in the nation’s historically stable religious alignments. Those changes include shifts in the faith of Hispanics, rapid growth of Islam and Eastern religions, a precipitous decline in Christianity, and reduced confidence in religion nationwide.

According to new research from George Barna of the Cultural Research Center at Arizona Christian University, the dramatic transformation of the nation’s worldview away from biblical truth is ushering in “the most rapid and radical cultural upheaval our nation has ever experienced.”

“I’ve studied worldview and religious trends for more than 40 years, and nothing has been more striking than what we are witnessing today in the American cultural landscape,” Barna explained. “This new America we see emerging is radically different—demographically, politically, relationally and spiritually.”

The latest AWVI 2021 report shows that the historical foundations of stability in American religion are becoming increasingly shaky. For example, the percentage of U.S. Hispanic adults who self-aligned with the Catholic faith has been sliced in half, from 59% to 28%, in the last 30 years. And those former Hispanic Catholics are not flowing into Protestant churches, but are leaving Christian institutions altogether.

At the same time, the proportion of “Don’ts” (i.e. people who say they don’t know, don’t care, or don’t believe that God exists) among Hispanics has increased tenfold in the last three decades, rising from 3% in 1991 to 31% today, the research found.

This growth of “Don’ts” among Hispanics parallels what is happening in American faith more widely. According to the CRC worldview research, the number of U.S. adults who qualify as “Don’ts” has nearly tripled in the past decade, rising to 34% in 2021. Millennials (ages 18 to 36) are driving much of that shift, with 43% rejecting the existence of God.

This growth in “Don’ts” also accompanies the steady decline of Christianity as the preferred faith in America, the research shows. As recently as 1980 more than 90% of Americans claimed to be Christians. Since that time there has been a steady decline in self-identification with the nation’s foundational faith. By 2010 three out of four adults claimed to be Christian, and currently, just under two out of three make the same claim.

Specifically, the dramatic decline in Christian belief can be seen in four key spiritual indicators tracked by Barna and the CRC:

Belief in the existence of God as the all-knowing, all-powerful creator of the universe who still rules the world today:down from 86% in 1991 to 46% in 2021
Belief that the Bible is the accurate and reliable word of God: 70% in 1991; 41% in 2021
Belief that when they die, they will go to Heaven only because they have confessed their sins and accepted Jesus Christ as their savior: 39% in 2011; 30% in 2021
Adults possessing a biblical worldview: 12% in 1995; 6% in 2021
The research goes on to identify two rapidly growing faith segments in America. One is Islam (less than one-half of one percent of adults affiliated with Islam in 1991 versus nearly 3% today). The other is Eastern and New Age religions (such as Buddhism and Hinduism), presently comprising nearly 5% of U.S. adults, more than double in last decade.

Finally, one of the AWVI’s most surprising revelations is the renewed interest in reincarnation, reflecting the increased interest in Eastern religious thought and practices over the last 10 years. Currently, 9% of adults believe they will be reincarnated, a dramatic increase in the last three decades. Additionally, four out of 10 Americans (39%) believe that reincarnation is a real possibility for them, including 51% of Millennials.

Amazingly, substantial proportions of people associated with Christianity also embrace the possibility of reincarnation. For instance, one out of four (24%) theological born-again Christians and more than one-third of all self-identified Christians (36%) also believe that reincarnation is a real possibility for them.

One number that hasn’t changed? Americans generally reject the idea of going to Hell, or some place of eternal torment, after death. Currently, just 2% of Americans believe they will experience Hell after they die. That figure has fluctuated between 1% and 2% for the past 40 years.