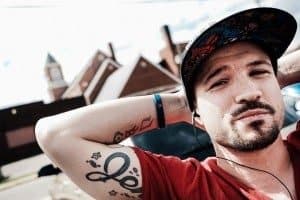 John Allen, a heroin addiction survivor, attends a march through the streets of Norwalk, Ohio, against the community’s heroin epidemic on July 14, 2017.

Over the past couple of years, photojournalists have aimed their lenses at America’s most pressing public health emergency: the opioid overdose crisis. The March issue of Time did something the magazine had never done before: dedicate an entire issue to the work of one photographer, pre-eminent war photographer James Nachtwey, shooting one topic, the multitude of devastation wrought by America’s deadliest drug crisis in history, in black and white. Close-ups focus in on public injection and first responders bringing people back to life.

Nachtwey’s images convey a battle being lost in his own country; the suffering, in this case, is at home.

As in his war photography, Nachtwey’s motivation to shoot “The Opioid Diaries” is genuine, even noble. In a tearful speech about the project at the Newseum in D.C., Nachtwey said it’s his and Time’s wish that the photo essay prompt “more effective ways of dealing with” the crisis among decision-makers. But in their laudable quest to document reality, projects like “The Opioid Diaries,” the New Yorker’s similarly themed “Faces of an Epidemic,” and even the Pulitzer Prize–winning “Seven Days of Heroin” from the Cincinnati Enquirer actually fail to capture it.

Rather, these glossy, often black-and-white images document a reductive slice of what the opioid crisis really is. Yes, there are funerals and overdoses, but they’re not the whole story. Nachtwey’s “Opioid Diaries” is described as a “visual record of a national emergency,” but by zooming in on only the most severe cases, shooting people at their lowest lows, and neglecting to capture even the possibility of recovery, he misses a whole side of the story. In the end, the portrait painted is so stark and dire that not only does it not reflect the current reality, it feels like a representation that could end up being harmful for people living with addiction who want to get better but feel helpless and hopeless.

And addiction is a chronic illness—one that tells a uniquely human story of psychological entanglement and contradictory motives. There are numerous theories of what causes drug addiction. But it tends to start (obviously) with liking the feelings that drugs produce (warmth, euphoria, belonging) or the erasure of other feelings (trauma, loneliness, anxiety)—usually both at once. After continued use, the body comes to depend on the drug to function, as life becomes more and more dysfunctional. Desire for the drug eventually becomes an act of survival. True addiction feels like being trapped in an escapable loop: You need the thing that’s destroying you.

The thing is, it is escapable. More often than not, there’s a third act to the story of addiction, one that hinges on personal growth and transformation. The latest national survey estimates that 22.35 million (or 1 in 10) adults in the U.S. have “resolved” an addiction. But public perception is skewed toward severe cases, thanks to narratives like the ones featured on A&E’s Intervention, where the addictions are always intense and require expensive rehab. The lives of millions of people who have recovered, some without any formal help whatsoever, are left out. That third act is largely absent from these projects.

And people who have overcome their addictions are an important part of the crisis. Dr. Nora Volkow, director of the National Institute on Drug Abuse, best explained why in her recent piece for Scientific American: “Viewing [addiction] as a treatable medical problem from which people can and do recover is crucial for enabling a public-health–focused response that ensures access to effective treatments and lessens the stigma surrounding a condition that afflicts nearly 10 percent of Americans at some point in their lives.”

It’s also no coincidence that Time and the New Yorker decided to capture overdoses in black and white. In “Faces of an Epidemic,” text describing the crisis as a “mass-casualty event” is overlaid on a low-contrast, gray-washed looped video of a suburban Ohio street, producing a feeling of eerie horror. It’s a ghost’s vantage point. Nachtwey’s stark images in Time are even more brutal. Black-and-white photos are “visceral” and “evocative,” photojournalist Ryan Christopher Jones, whose work frequently appears in the New York Times, told me. “It’s tied to our cultural memory of how war and devastation have historically been visualized.” Jones says that depicting a modern drug crisis in black and white makes us feel like we’re looking at war. To me, it’s highly produced disaster porn.

To be fair, Nachtwey at least attempted to shoot recovery. The third act of “The Opioid Diaries” is titled “Aftermath, Resilience & Recovery.” But the first image in this section is of a 29-year-old woman experiencing withdrawal in a jail cell; a heart is etched next to the words “I miss my kids!!!” on the black concrete wall next to which she is shivering. (Withdrawal from heroin feels like having 24/7 goosebumps.) The next image is of a man, looking worn down, who volunteered for the jail’s “rehabilitation program”—whatever that is, if not a cruel redundancy. The third image is of another woman experiencing withdrawal in jail. Next is a man in handcuffs who is going back to jail after relapsing during drug court. I think you see the pattern (there are some photos that don’t involve jail—but those mostly show death).

The thing is, it is escapable. More often than not, there’s a third act to the story of addiction, one that hinges on personal growth and transformation.

Yes, it’s a sad truth that people are jailed rather than given medical help. But despite Nachtwey’s intention to show this to inspire “more effective” solutions, it seems likely that images like these instead further entrench the notion that addiction is a sin or crime and that jail is the right place for people with addiction. What the photo essays don’t capture is that when people with opioid addiction are released from jail, their risk of overdosing is astronomical thanks to their diminished tolerance. In fact, the prison conditions for people with addiction are so atrocious that they are currently being investigated as a violation of the Americans with Disabilities Act, because life-saving medication that reduces the risk of overdose is being withheld. Sure, an argument could be made that showing addiction as a crime may motivate more humane fixes. But why not show what those more effective solutions would look like, too, at least to underscore the vast difference between them and incarceration?

Last October in Slate, I covered the increasing role that recovery activists are playing in the national dialogue about the overdose crisis. I went back to a few of those activists to ask what they thought about the photo essays. “They didn’t finish that article!” Garrett Hade, of Facing Addiction, told me about Time’s essay. “There’s a part after the criminal justice system. What happened to that person when they were released from probation and don’t have to go to court anymore? Did they get support? Are they employed?” Recovery activist Cortney Lovell told me that the “continued use of glorified drug paraphernalia in media only further stigmatizes an already vulnerable group of people.” For contrast, Lovell pointed to the Centers for Disease Control and Prevention’s “Rx Awareness” media campaign, which featured her in September 2017. Though not perfect, the CDC’s campaign didn’t feature disaster porn. Unlike the hopelessly dark, Requiem for a Dream–style images featured in major media outlets, the CDC featured the faces of healthy people who have moved beyond their addictions.

Similarly, Jones, who only shoots in color—because, as he put it, “we live in color”—recently photographed a number of people who have recovered from opioid addiction, including me, for a new photo essay in the New York Times that attempts to capture the third act of the story that is too often ignored. The project features close-ups taken by Jones next to words from Maia Szalavitz describing our different journeys, showing what our lives look like after addiction ends. Jones and Szalavitz teamed up out of mutual dissatisfaction over the year’s biggest opioid packages. Unique to their project is showcasing a diversity of pathways, bucking the status quo that prioritizes 12-step-style abstinence. The decision to use close-ups is also important: There’s no room for readers to distance themselves from the subjects; they’re forced to look us in the eye instead of at our scars.

This photo essay is similar to the Times’ “Faces of HIV” published in June 2013. Both show a variety of faces from different walks of life, people in suits at work, a black woman kissing her relative, a Native American woman in Minnesota who turned to her family’s spiritual tradition for help. The takeaway is powerful: Once thought to have a death sentence, people with HIV today are by and large living fruitful lives. The same is true today with addiction—and seeing it could make a world of difference.