The Atheist in AA 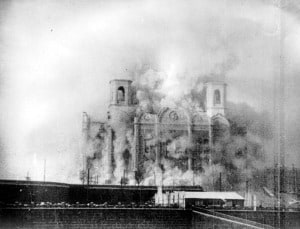 The Demolition by the Bolsheviks of The Cathedral of Christ the Savior, Moscow 1931

We Are Not Bolsheviks – The Atheist in AA – Recovery Without Compromise

Within the world of Secular AA there seems to be some confusion about who or what we are. This would seem to be inevitable when you mix Atheists (“I know there is no God”), Agnostics (“I can’t see any Gods but I can’t be certain”) and Freethinkers (I still don’t have the slightest idea of what they believe but one definition says the following, “a person who forms their own ideas and opinions rather than accepting those of other people, especially in religious teaching”) together in a relatively new international movement.

As a committed militant atheist and dialectical materialist as well as an author I tend to go with the literal, accepted definitions in the dictionary when dealing with words. Now that we have clearly identified ourselves as Secular AA as an organization I’ll let the Oxford American Dictionary define a couple of terms:

Secular, adj. 1) not spiritual or sacred. 2) not concerned with religion or religious belief.

Spiritual, adj. 1) of or concerning the spirit as opposed to matter. 2) religious, divine, inspired.

So, literal minded Atheist that I am I will conclude that Secular AA, by definition, is not and cannot logically be “spiritual” in an organizational sense while some of its individual members may indeed believe in ways that are at variance with that definition. As always in AA, you are a member if you say you are.

However, despite the obvious “inclusion” of any individual member who says she or he is a member, being a 29+ year member of a Secular AA group has led me, inevitably, to seek out like minded people in the fellowship to help define the organization as I see it.

Unfortunately, the “right wing” Revised Steps and Revised Big Book factions of Secular AA have been defining Atheists recently both in print and verbally in a negative way and a few months back I took a stab at what could be a brief “Atheist vision statement” and circulated it amongst some individual members I know to be committed Atheists as well as several members of the leadership group at Secular AA. This statement, that was intended to indicate what an Atheist in the fellowship could possibly be, was greeted with both agreement and “horror” that I would take issue with the traditional program in this way and some wise old members suggested that I “tone it down” for general consumption. Being “constitutionally incapable” of following that sage advice to be “political” about this I therefore can only indicate that what follows is just my own opinion that does not represent any organized group or faction within the fellowship. It can possibly be treated as a “jumping off point” for some sort of group conscience or serious discussion in the future. Here it is:

Given some confusion regarding the goals and direction of the Secular AA Movement it now seems appropriate to articulate the following:

There is a subset of us (call us “real” or “militant” atheists or what have you) that categorically reject the totality of the Twelve Steps in any form (Religious Traditional/Secular or otherwise) as directly derived from the First Century Christianity of the Oxford Group. Likewise, we reject the Big Book, in its entirety, as the outmoded, destructive, condescending document that it is. The Big Book is irrelevant in the modern world. What many/most of us do accept is the proposition that once an individual has decided (a self-motivated and not “spiritually” motivated decision)  to stop drinking, that the power of the meetings themselves, the power of sharing with another alcoholic and the attempt, in the end, to be of help to others has led many of us, despite our rejection of the rules, lists and books, to a healthy and productive sober life (over decades in many cases) without any recourse what so ever to Christian concepts rooted in “confession” and self-abasement.”

Now, having said this I can already hear the wails from the “middle” that the radical faction has finally shown its cards and have shown, after all, that they are church burning militants who want to force their opinions on others. Nothing could be further from the truth and I will now attempt to explain myself from my personal perspective, given my experience, only.

Atheists do tend to be “Restrictive” in terms of a world view. By restrictive I mean that we know what we know when we know it and say what we mean when we mean it. Many of us tend to articulate our views in a direct manner that is culturally at variance with what many people consider to be conventionally polite. If we think you are wrong, we will tell you.

We are fully aware that we can be individually wrong on certain discrete facts that any human being can misconstrue or misinterpret but on the larger questions, such as the total absurdity of the idea of a deity and the delusions of the “spiritual” life, we tend to be quite definitive and dismissive of such assumptions. This can be seen by others as “arrogance” but to us its just a matter of fact. Its where many of us are coming from, like it or not.

Regarding some of our reactions to what is going on in Secular AA the passion on this end needs to be viewed within the context of AA when a “real” or “militant” Atheist encounters the Christian inspired and directed literature and avowedly religious tenants of the conventional AA program. The results can be both combustible and tragic. Many a committed Atheist has walked off in disgust and I was almost one of them. If my Secular AA group in DC had not been founded in 1988 I’m certain I would have left the program and, likely, finished myself off long ago. I was fortunate that no Steps or Big Book nonsense was ever proposed as being “revised” to me by fellow members then or now because I would have seen that as equally objectionable from the Atheist point of view. I got lucky. Others may not be as fortunate and some of us are intending to offer a counterpoint to what has been developing as the Conventional Wisdom here.

We are not “Dogmatic” in the sense that the Bolsheviks were. No matter what will be said by the “AA Lite” crowd we have not turned our Atheism into another religion. As I indicated we are not about to burn a church or any holy books. Even Wally P and “Back to Basics” are safe from us. What we do react to is the tendency to be “everything to everybody” thus rendering us “nothing to anybody” by so diluting the Secular AA message that we may as well be in a Unitarian Church or Quaker Meeting House. The Unitarians and the Quakers are most certainly better than the Catholics or Baptists, but they are still religions and we are not!

All we demand from Secular AA is a seat at the table without being marginalized or dismissed by the new Secular AA dogma about “Inclusion and Diversity” masquerading as something else while turning us into something we should not be and deploying the catch all phrase “AA Unity” which can be used to stifle dissent and disparage contradictory views.

While we are not about to go away, roll over and play dead we are also not going to drag our leadership, or any members who don’t agree with us, off to Yekaterinburg to be sent down the stairs with the Tsar and Anastasia. You are all as safe as Wally!

Another thing we are not is “Proscriptive”. We cannot and will not tell you to do, see, or say anything that you do not want to do, see or say. I have never met an Atheist who is into conversion. The streets aren’t exactly swarming with young, good looking Atheist kids in white shirts and black plastic name tags holding nothing in their hands trying to convince you there is nothing there. We don’t do that, and we won’t try no matter what is said about us. We are worried about our own people who came to their own conclusions in their own way and are looking for sobriety in a totally dogma free, secular context.

While Secular AA is truly a “big tent” in terms of its membership I have noticed the tendency of some of our Atheist members to be reticent about their identification and their true ideas and ideals even in the context of Secular Meetings. I’ve been thanked numerous times, while traveling to out of town events and conferences, for speaking up for the Atheist view. Being a “minority” within a minority has its own challenges and I am urging all our truly Atheist members to speak up and speak loudly whenever they feel that their identity is being disparaged or marginalized. Likewise, I urge our members who are still wedded to versions of the Steps, parts of the Big Book, the word “spiritual” and the “Language of The Heart” to understand that we are not attacking you personally and to reflect on the definition of the word Secular while evaluating your own participation in Secular AA and the implications, for some, of some of your own words and actions. 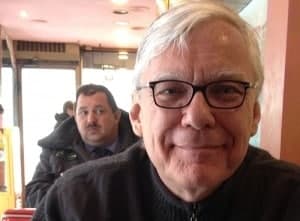 John Huey’s student work of the 60’s-70’s was influenced by teachers in Vermont such as John Irving at Windham College and William Meredith at Bread Loaf.
After many years he returned to writing poetry in 2011. He has had poems presented in ‘Poetry Quarterly’ and in the ‘Temptation’ anthology published in London by Lost Tower Publications. Work has also appeared in ‘Leannan Magazine’, ‘Sein und Werden’, at ‘In Between Hangovers’, ‘Bourgeon’, ‘The Lost River Review’, ‘Red Wolf Journal’, ‘Perfume River Poetry Review’, ‘What Rough Beast’ and ‘Memoir Mixtapes’.  His full-length book, ‘The Moscow Poetry File’, was published by Finishing Line Press in November 2017. Full information and Amazon links can be found at  http://www.john-huey.com.

9 thoughts on “The Atheist in AA”